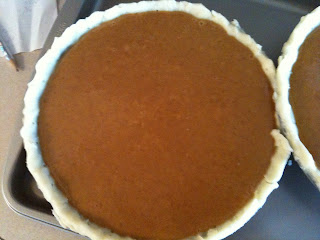 Last year I posted egg-free recipes, but my kids tolerate eggs now--at least in baking--so this year I am going with the Libby's world-famous pumpkin pie recipe from the back of the can of Libby's pumpkin. The recipe is on the back of the can but I'll type it up here so you will have it handy. You can use any pumpkin you want, but I have to say that I have never been satisfied with any other brand (or even fresh pumpkin) other than Libby's.
This recipe makes two pies. All I had to do to make it soy/dairy free is to substitute the evaporated milk with evaporated rice milk. The instructions below are how to make a soy/dairy/gluten free pie:
Step 1: evaporated milk
Pour about 64oz plain rice milk(2 boxes) or SoDelicious Coconut Milk into a large pan (at least twice as high as your liquid so your milk doesn't boil over). Simmer on med-high heat, stirring occasionally so it doesn't burn to the bottom of the pan. Boil it down until it reaches 12 oz--less than half of what you started with. This will take at least as long as it takes to prepare everything else.
(You can also do this with soy milk, but you will probably not need as much because soy milk is typically thicker than rice milk).
Step 2: pie crust
recipe adapted from the Gluten-Free Gourmet by Bette Hagman
1/2 c tapioca starch
1/2 c corn starch
1/4 c potato starch
1 rounded tsp xanthan gum
1/2 tsp salt
1/2 c soy-free margarine
1/2 c palm oil shortening
1/4 tsp imitation butter flavoring (optional)
1 egg, cold
1 tbsp GF vinegar
4 tbsp ice water (if you use only 3 tbsp you don't need to chill the dough)
sweet rice flour for rolling
Mix all the dry ingredients in a large bowl. Cut in margarine and shortening until the mixture pieces are about the size of lima beans. With a fork, beat the egg, vinegar, and ice water together and stir into the batter. It will slowly get thicker as you stir. form it into a ball (or as close as you can get) and cover the bowl with a damp cloth. Refrigerate for at least 30 min, while you prepare the rest of the pies.
After the dough is chilled, reform it into a "brick" and divide it into how many pieces you need. (It makes three thin crusts or two thick ones). Lay out two pieces of saran wrap (connected at the edge to give you a large rolling surface) on your table or counter top and sprinkle rice flour or tapioca starch on top to prevent dough from sticking. Spread out dough as much as you can with your hands and lay it on the saran wrap. (You can also use parchment or wax paper but saran wrap is the easiest for getting the crust into the pan). Place another piece of saran wrap over the crust and roll until the size of your pie tin. Slowly peel off the saran wrap and lay a thinly greased pie tin upside-down over the crust. Carefully place your hand underneath and flip the pan and crust right-side-up. Peel off saran wrap and shape crust onto pan. With a fork, poke holes all over the crust to prevent it from bubbling up.
Step 3: pie filling
1 1/2 c sugar
1 tsp salt
2 tsp ground cinnamon
1 tsp ground ginger
1/2 tsp ground cloves
4 large eggs
1 29 oz can pumpkin puree
24 oz evaporated milk
Preheat oven to 425 degrees. Mix powder ingredients in a bowl and set aside. Beat eggs into pumpkin a little at a time. Slowly beat in the powder mixture. Set aside until your evaporated rice milk has finished boiling and has cooled a little bit. Once milk is ready, slowly mix into the pumpkin mixture and then pour into pie crust.
Bake at 425 degrees for 15 minutes. Reduce temperature to 350 degrees and bake 40-50 more minutes (I usually have to do it 55-60 minutes--not sure if that's because of the rice milk or the high altitude where I live) or until a knife comes out clean.
Posted by Michelle at 1:04 PM