I used to love making graham cracker houses with my family when I was a kid. I made my husband and foreign exchange student make them a few years ago even though none of us were kids because I love doing it so much. I was sad when I realized that I couldn't do that anymore.

But this year I learned that I actually had two choices. I could uses Kinikinnik Smoreables to build houses with, or I could try to make my own gingerbread. Since it would take a whole lot of Smoreables to build a house I opted to try to make my own gingerbread for the first time ever! I searched the internet and found this recipe and was going to try it because the almond meal sounded good. However, a friend of mine posted a different recipe and I had both up at the same time. I accidentally started following my friend's recipe instead so I just went with that one, with a few adaptations. I'll try the other one next year. ;) The recipe as I used it is posted below. 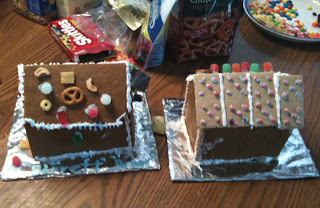 For candy we used various gluten-free cereals, cashews, Glutino pretzels (they contain soy lecithin but my son never reacts to the lecithin so we still use them), spice drops, Nerds, Skittles, M&M's (for my dairy-eating daughter), and gummy bears. 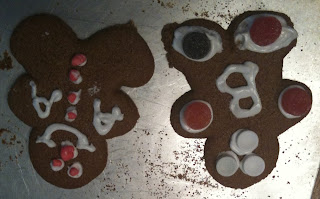 I'm not sure why Blogger keeps inserting this picture upside down but I'm tired of trying to fix it so you'll just have to use your imagination.

1/2 c sugar
1/2 c molasses
1 1/2 tsp ginger
1 tsp allspice
1 tsp cloves
1 tsp cinnamon
2 tsp baking soda
1/2 c palm oil shortening
1 egg, beaten (I haven't tried it with egg replacer but I might next time because it turns out that my son is still having problems with egg).

Directions:
In a saucepan, mix sugar, molasses, ginger, allspice, cloves, and cinnamon and bring to a boil. Meanwhile, mix flour mixture together in a mixing bowl. Once sugar mixture is boiling, remove it from heat and stir in soda (it will foam up). Melt in shortening. Slowly stir in flour mixture. Knead dough until fully mixed.
Preheat oven to 325 degrees Fahrenheit.
Lay out plastic wrap or parchment paper on rolling surface. (Some recommend to use a floured surface but for me it worked better to just use plastic wrap.) Divid the dough into two equal portions. Set one aside with a wet towel over it to keep it from drying up. Smash the other flat and lay it on rolling surface. Place plastic wrap over the top and roll it until it is about 1/4 inch thick.
Create pattern pieces using wax paper (don't use mailing envelopes like I tried, because you won't be able to peel the paper off the dough). You can draw your own or look one up on the internet. Place the pattern over your dough, cut it out, and move it to a greased cookie sheet. They shift a bit when you move them so you may have to trim them later.
Bake for about 12 minutes. Let them cool for just a minute and then move them to a cooling rack. (Don't wait too long or you will regret it, they harden pretty fast and it is difficult to get them off without breaking them).
For me, this recipe made two houses with pieces about 4x6 inches, and four gingerbread men. Except that I was short one piece on one of my houses so it probably would not have made any gingerbread men if I had remembered the last piece. 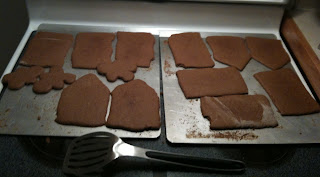 Next you need to make frosting to put the house together. I used Royal Frosting this time, but it's not going to cut it next year because like I said earlier, I found out my son still doesn't handle eggs well. The egg-white in the frosting was just too much for him. But for you...here it is:
2 egg whites
2 tsp lemon juice
3 c powdered sugar
Put egg whites and lemon juice in a mixing bowl. Beat until the mixture is frothy. 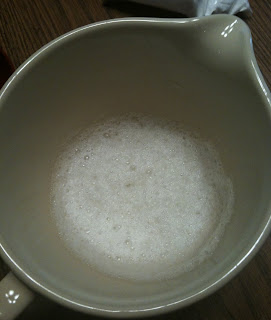 Add the powdered sugar and beat in. Once the sugar is mixed in well enough that it doesn't fly all over the place, beat on high until the frosting is shiny and it peaks. 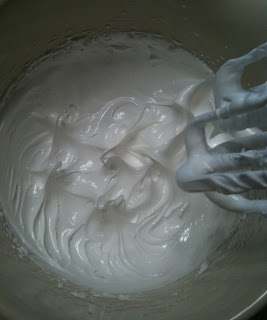 Spoon it into a frosting bag and cover what you do not use with a damp cloth to keep it from drying out.

Now you are ready to put your house together. Do this the day before you plan to decorate it so it has time to dry up and gather strength. 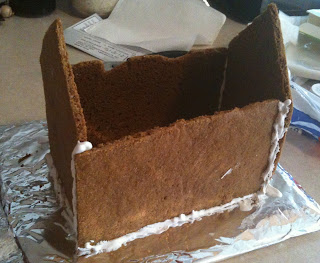 I had a really hard time putting mine together because I didn't trim the pieces and they weren't stable enough to stay up. Finally I gave up and trimmed all the edges straight with a serrated knife. I had my son hold up one wall while I attached others to it for stability. I made the base and left the roof for later because I didn't want to take any chances.
In the picture at the top you will also notice that one roof is different from the other. That is because I forgot to make one piece and so I used Kinikinnik Smoreables to finish it off. I thought they made a pretty cute roof so maybe next year I will make the house out of gingerbread and use crackers for the top. That way there will be enough dough leftover to make a few more gingerbread men.
Also, after I discovered my son got sick off of royal frosting, I made a new kind to attach the candy with. It didn't really work all that well but it was enough to get a 4 and 2 year old through the process. I just mixed powdered sugar with rice milk and made it really thick. I left out the shortening/butter because those don't really dry out. I also added blue food coloring so my son could tell the difference between "safe" and "not safe" frosting.
I found a recipe that supposedly worked really well but I didn't try it. It called for glycerine and I was hesitant to put something that is commonly used in soaps and lotions in my frosting. Maybe next year though. ;) 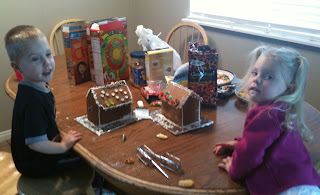