Pumpkin pie is my favorite part of Thanksgiving and I wasn't about to go without just because of food allergies. Last year in a gluten-intolerance group meeting I learned how to make a delicious pie crust so I started with that:
Crust:
Donna Jo's Dream Pastry 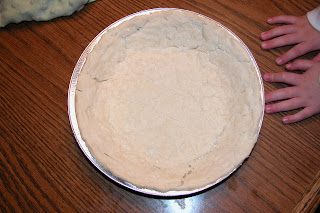 I believe it comes from the Gluten-Free Gourmet cookbook. I'm sorry I'm not going to post the whole recipe because I don't want to be guilty of copyright infringement, but I posted a link so you can still get it. I used Ener-G egg replacer instead of the egg and it worked out just fine. I also used Earth Balance Soy-free margarine and Spectrum organics palm oil shortening in place of Crisco and butter. The crust looks pretty bad in my picture, but that's because I forgot to take pictures of the good ones before I filled them. This one is broken because I had too many "helpers" in the kitchen. It tastes delicious though!
Pie:
I decided to try four different varieties of pie to see which ones I liked the best. I went for two baked and two un-baked versions. In place of milk in all of these pies I used 2 quarts of Pacific Foods plain rice milk boiled down to about 1 quart with 1 cup of sugar added (for my own version of sweetened-condensed milk).
#1. Vanilla pudding Pumpkin Pie-unbaked: 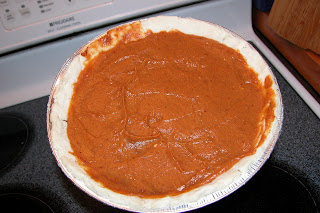 (It is actually supposed to be Butterscotch but I didn't want to go to the store and I already had vanilla pudding). It tasted pretty good but did not set up very well. It might work better with real milk, or less milk, but I don't know. I also think the recipe calls for too much cinnamon so I'd put a little less in than it says. I don't think I'll be making it as a pie again but I'm thinking it's going to make some delicious pumpkin shakes.
#2. Unflavored gelatin Pumpkin Pie-unbaked: 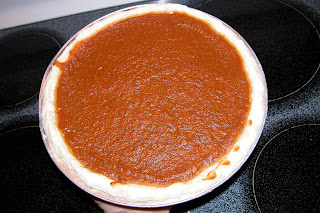 I thought this one tasted fine but the texture didn't really satisfy me. Too--gelatin-y.
#3. Corn Starch Pumpkin Pie-baked: 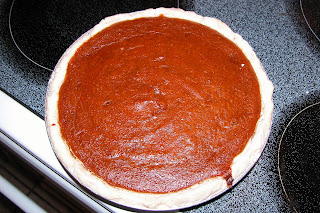 This one was the best of all the pies. It was fairly close to normal pie in taste and texture. I still just can't get over the texture of real pie--but it was a fair substitute and a nice treat. In the future I think I will stick to this recipe.
#4. Crustless Pumpkin Pie from Karina's Kitchen-baked: 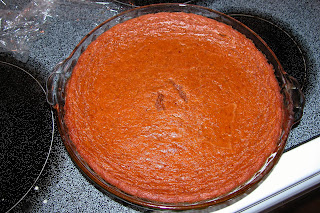 This one looked interesting so I thought I'd try it, even though I didn't really need to have four pies. Unfortunately I couldn't use what she says is her key ingredient--buckwheat--because Barrett doesn't tolerate that either. I used a mixture of sweet rice flour and sorghum instead. I have yet to taste this pie too but I'll post an evaluation as soon as I do. The batter tasted good and it looks good though.
UPDATE: This one tasted pretty good, but it's not like the "real" pumpkin pie that I crave. My kids absolutely love it though. They wouldn't eat any of the other pies but they beg for seconds and thirds of this one.
Posted by Michelle at 9:18 PM