Having children with food intolerances has its challenges for both mom and children. I have watched my children go through some heart-wrenching experiences. There were times where they had to sit apart from the other kids in the church nursery and eat their own little snack so they would not take any from the other children. They have gone to birthday parties where the mother had said they would have something for my kids but then forgot and I took my kids home in tears. In preschool Barrett had to always be the odd one out who got a few Starbursts while everyone else had cookies or cupcakes on the other kids' birthdays. When it was his birthday I was determined that he could be like anyone else and so I made allergen-free cupcakes with little monster trucks on top--only to be told that homemade snacks were not allowed for safety reasons. (Ironically, Barrett cannot eat most store bought snacks for safety reasons). We have gone to wedding receptions where well-meaning people have handed my children cookies which I then had to take away, breaking their little hearts.

One of the worst times was when I had made one of Barrett's favorite meals for the family, and made him his own dairy-free version. We all had a fine dinner and Barrett ate all of his. The disappointment came when I was eating leftovers for lunch the next day and Barrett wanted some too. When I told him his was gone he just burst into tears. I don't know what it was--maybe just the final straw. But we have had so many experiences like that, I wanted to find a book or something to help my children feel better about their situation.

I looked around on the internet for such a book, but could not find anything. I decided to take matters into my own hands and write a book myself, using experiences from my own childrens' lives as well as some children who live near me. This is the result: 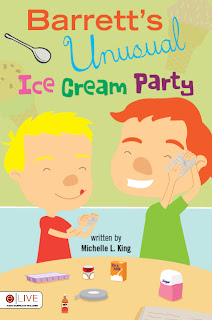 'That will make you sick.'

This is one of the first phrases six-year-old Barrett learns because he has celiac sprue, which means he can't eat cake and bread or even drink milk.

Barrett is embarrassed of how different he is from the other kids in his class...until a new kid who also has unusual allergies comes to school.

At Barrett's Unusual Ice Cream Party, Barrett and his classmates learn that what makes them different makes them special.

It is available from the publisher now, and will be available through Amazon and other large chain stores in mid-April.

For more stories and information visit my author's website and my Facebook page.
Posted by Michelle at 9:39 AM